Quite some time ago I wrote a post on Fraser Island, but now that I’m back home in Northern Ireland with a bit more time on my hands, I’ve been busy going through all my travel footage and making videos. So here’s one of them, 3 days on Fraser Island condensed into 3 minutes of footage showing my favourite spots.

Leaving Newcastle behind it wasn’t long until we came to Port Stephens. This isn’t a town, but an area, which is made up of a few nice costal villages. We arrived first at Anna Bay and stumbled upon a beach called Birubi Point.

Being a Sunday the place was overrun with tourists, and I could see why they were all here. The beach was long and beautiful running off far into the distance. But even more spectacular, were the Sahara style sand dunes that backed it. They were huge and seemed to go on forever.

END_OF_DOCUMENT_TOKEN_TO_BE_REPLACED

If there’s one thing I love about Australia it’s the wild life, it’s just so diverse and it’s everywhere, I feel like I see something new every week. And my favourite animal this week is the pelican.

These birds are pretty massive, they almost look like some kind of modern day pterodactyl! I love it the way they stand side on to you, just staring at you through their big unblinking eye… although it is a bit weird.

The first time I saw a pelican in Australia was while working on the farm in Blighty, NSW. Being about 4 hours away from the coast I was a bit confused! But apparently they turn up every year, around the start of winter, when the irrigation channels get drained and there’s lots of fish to be had.

Now, travelling up the East Coast they’re almost as common as seagulls, although much less annoying. You’ll see them on the beaches or hanging around the inlets, patiently waiting for the fishermen to get back, as they know they’ll get some fish scraps.

So this was it, we were leaving Sydney and heading towards Newcastle with not much more to guide us than a Lonely Planet book from 2009, which we’d had for a while but only just started using. I got into the habit of reading a few pages ahead as we went so if there was anything of interest, we wouldn’t miss it. But mainly what we were interested in was finding good surf beaches!

Once out of Sydney we soon got off the highway and headed for the Bouddi National Park to check out the Central Coast. We spent the day exploring the beaches and stopped at Little Beach for a picnic on the sand. But with not much surf around we continued on to the town of Avoca, where although the waves looked a bit messy, there were plenty of surfers in the water showing it was possible.

END_OF_DOCUMENT_TOKEN_TO_BE_REPLACED

After our trip to the Blue Mountains we went back to Sydney for one more cheeky night out. This time we wanted to do it completely on the cheap, which meant no hostels! We payed $3 for a shower at a swimming pool in Parramatta and then looked for somewhere to leave the van. We drove around until we found Merrylands, possibly one of the dodgiest suburbs in Sydney! But it would have to do. We parked up in one of the nicer streets, packed a few ciders into my handbag, and got the train into the CBD.

Once there, we went straight to the Darling Harbour and to a bar called Pontoon. The place had caught my eye a few days ago when I saw meals advertised for just $9! At 8pm there was already a bouncer on the door so I had to hide my ciders in a bush before he would let me in. Once in we got $9 burgers right off the grill with chips, and even splashed out on a beer. Who says Sydney’s expensive!

END_OF_DOCUMENT_TOKEN_TO_BE_REPLACED

After 4 days in Sydney Chris and I were looking forward to getting away from all the people and traffic by escaping to the Blue Mountains. 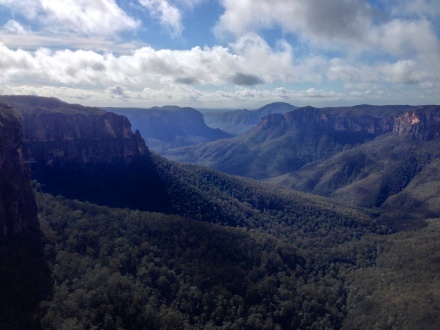 We drove for 2 hours along the Great Western Highway before arriving at Katoomba, the chief town in the Blue Mountain area. I suppose I should have realised that, being so close to Sydney, the Blue Mountains wouldn’t have that isolated, middle of nowhere feel to it. But still, I was a bit surprised by the amount of work and money that must have gone into this huge motorway. As we turned off, it was hard to imagine we were right next to a national park.

END_OF_DOCUMENT_TOKEN_TO_BE_REPLACED

I love my campervan, and I love travelling this way. But shortly after buying our van Chris and I found it wasn’t the most secure. It seems any key, when inserted only halfway, can open the drivers door. And once I accidently started and drove the van with the wrong key. We tried a different lock barrel in the door but it was a dodgy lock too, maybe it’s an ‘old van thing’…

But as Chris pointed out, if someone really wants into our van a locked door won’t stop them, they’ll just smash the window the way they did with our car in New Zealand. I’ll never forget that day at Cape Reinga. We’d been away on an amazing two day hike. It was pissing down with rain but we arrived back at our car in high spirits, only to see broken glass all over the ground along with some of our discarded belongings. I felt sick.

So obviously sometimes it’s hard to relax when leaving the camper, especially after splashing out on two new surfboards. Everything in the world that I own and care about is in that van! And with the surfboards up on the roof racks it pretty much advertises ‘backpackers’. END_OF_DOCUMENT_TOKEN_TO_BE_REPLACED

Unlike the rest of our trip, Chris and I decided to actually do a bit of planning for Sydney. I just didn’t want the stress and hassle of driving through the congested city, looking for sneaky places to sleep at night in the camper, or trying to find a shower.

So weeks in advance, we booked to stay in a twin private room at the Maze Backpackers, a hostel on Pitt Street. It was only $30 each per night for our own room and we were so central, I thought it was definitely worth it.

We entered Sydney on a Friday night and drove around for a while looking for somewhere suitable to leave the van. Eventually we found a fairly busy street with free parking near the Ashfield railway station, only 20 minutes from Central Station. I wouldn’t necessarily advise this approach to anyone! Leaving your van on a Sydney street for 4 days probably isn’t the best of ideas…. But we were taking everything we cared about to the hostel and had a steering lock to try put thieves off. We slept in the van that night and then set off to the hostel the next morning. Walking away I just prayed it would be alright.

END_OF_DOCUMENT_TOKEN_TO_BE_REPLACED

I can’t remember the last time I had a really good night out. Spending 6 months working on a dairy didn’t present too many chances. There was only the one small pub down the road from me, and I thought it was better to stay away and save the cash rather than wasting it drinking beers in a place that had no entertainment and was long overdue a make over!

So when I arrived in Sydney I was pretty excited to let loose a bit and see what the city had to offer. Walking through the CBD there’s absolutely no shortage of clubs, bars and pubs. I started my night out going to a few bars, making use of the ‘free drinks’ vouchers my hostel gave me. But I’d been in the first bar for all of one minute when I knew I’d be downing my free drink and getting out asap.

As I stood in a ridiculously long line waiting to get served at the bar my patience was seriously running thin. Getting hot and flustered, being shoved left and right, waiting tediously while the people in front ordered as many drinks as they could carry to avoid going back anytime soon. The girls around me dressed to the nines with their noses in the air, looking around to see which guys are watching. Shit music blasting from a crappy sound system, drowned out by people shouting to each other, trying to be heard.

END_OF_DOCUMENT_TOKEN_TO_BE_REPLACED

Driving steeply downhill from the Snowy Mountains and heading towards the East Coast, it felt good. The air was quickly becoming milder and I decided I was pretty much over winter, I couldn’t wait for spring!

We hit the East Coast for the first time at a little beach town called Tathra. Reaching the peak of a hill I could see the long curving bay below, surrounded by trees with cliffs in the distance. I felt excited to see the sea again and everything had a more sub tropical feel. Chris and I got out and went for a walk along the beach, the sand was golden and the water looked pretty inviting, still too cold though.