Unlike the rest of our trip, Chris and I decided to actually do a bit of planning for Sydney. I just didn’t want the stress and hassle of driving through the congested city, looking for sneaky places to sleep at night in the camper, or trying to find a shower.

So weeks in advance, we booked to stay in a twin private room at the Maze Backpackers, a hostel on Pitt Street. It was only $30 each per night for our own room and we were so central, I thought it was definitely worth it.

We entered Sydney on a Friday night and drove around for a while looking for somewhere suitable to leave the van. Eventually we found a fairly busy street with free parking near the Ashfield railway station, only 20 minutes from Central Station. I wouldn’t necessarily advise this approach to anyone! Leaving your van on a Sydney street for 4 days probably isn’t the best of ideas…. But we were taking everything we cared about to the hostel and had a steering lock to try put thieves off. We slept in the van that night and then set off to the hostel the next morning. Walking away I just prayed it would be alright.

We checked into our hostel, chilled out for a while, took full advantage of the hot showers, and then went out to get our bearings. We really were completely central. From the hostel we could walk everywhere, the Darling Harbour, up to the Opera House, the bustling expensive shopping areas. Like Melbourne, Sydney is so multi cultural, rushing around the streets are people from all over the world, and there’s no shortage of restaurants and cafes providing more or less every cuisine you can think of.

From living and working in a small rural town to travelling in a campervan it’s been a while since Chris and I have been out for a proper meal, wine included. Being in Sydney, it felt like I was on holiday. I wanted to treat myself but still didn’t want to blow $80 on food. This is where I love Groupons. It can be hit or miss, you don’t always know if the restaurant will be any good, but at least it’s much cheaper.

We found a deal at a South American tapas restaurant called Patagonian Toothfish, $39 for 9 different tapas dishes and a bottle of wine, awesome. We arrived at the restaurant and it was a small, unusual, cute space with South American decor and a nice ambiance, plenty of bright, comfy cushions to sit against. The tapas portions started coming out and they were bigger than I thought they’d be and so tasty as well. By the end, Chris and I were stuffed, but the couple next to us had ordered desert, chorizos, and they looked amazing. We decided since we were on holiday we deserved it.

The next day we woke up to a gray, rainy day. It’s amazing how shit weather can make any city seem so depressing. I wanted to go out and get pictures of the Harbour Bridge and the Sydney Opera House but not in this. So instead we went to the Australian National Maritime Museum where there was an exhibition called ‘Beautiful Whale’.

This was a collection of photos by an American artist called Bryant Austin, the only photographer in the world producing life-size photos of whales. After that we explored the rest of the museum and then went to the Customs House, where there was another art exhibition and a library.

Feeling tired but extremely cultured we headed back to the hostel to get dinner and ready for a night out. We hit Pitt Street and George Street, going into a few crowded but very cheap bars where we had ‘free drinks’ vouchers to use thanks to the hostel. At about 10pm we headed back to the hostel, grabbing a carry out of cider on the way, and then got an Uber Taxi to a warehouse techno party, the only other thing I’d planned in advance for our Sydney trip.

The warehouse party was definitely a highlight, it just had such a different vibe than a club. There was a capacity of 200 people which was a really nice amount, busy but not packed. We listened to about six different DJs, all playing very different music, danced all night, and got talking to people from Ireland (of course) and some local Aussies. After, when the lights came on and everyone went their separate ways, we got a train back to central station and enjoyed walking back to our hostel through a much quieter and relaxed Sydney. 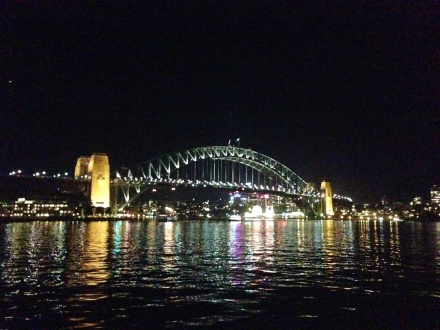 The following night we went to the cinema and then went to try and get some photos of the Harbour Bridge and Opera House at night. They weren’t the best, GoPros and Iphones aren’t exactly designed for night time photography. But it was nice walking through the city at night.

For our final day in Sydney we decided to go to the Taronga Zoo. I couldn’t believe how expensive it was! $54 for the zoo ticket and ferry to get there, but I guess I have to spend some money doing the odd touristy thing, and people had told me there were nice views of Sydney from the zoo. We checked out of the hostel, gave them our bags to look after, and went down to the Darling Harbour to get the ferry that left from just outside Madam Tussauds.

I’d already been to the Madam Tussauds in London so wasn’t really bothered about going to another one. Plus Ian Thorpe was out the front anyway, so that was enough.

The Ferry ride gave us the chance to get out on the water and see Sydney from a different angle. It brought us under the Bridge, past the Opera House, and out to the zoo. From here, we jumped in a cable car that took us to the top of a hill.

As far as zoos go it was a pretty good one. There were a heap of animals, many I’d seen before, some I hadn’t. If you timed things right (which we didn’t) you could see different talks, shows, feedings, get your photo taken while holding a koala. 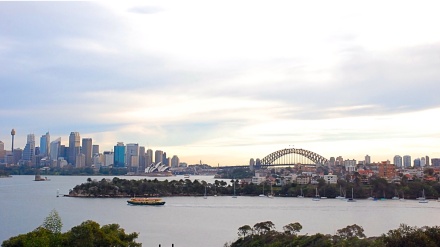 It’s cool that you start at the top and slowly work your way down, following different trails, catching a few good views, until you get back to the bottom.

But it is pretty massive. Chris and I arrived about 12.30, we maybe moved a bit slower than your average person, taking photos and videos as we went, but before we knew it, it was 5pm and the place was closing.

We pretty much had to rush through the last few trails, missing out some animals, so we could catch the last ferry back.

And just like that 4 days were over and it was time to go back to our campervan. We got the train out to Ashfield and tried to remember which street we’d left the camper on, everything looked different in the dark! We found the street and I held my breath as the van started to come into view. But all was good, there was no smashed window, our belongings weren’t strewn all over the ground, instead everything was as we’d left it. I suppose all in all Sydney was a success!

One thought on “Four Days in Sydney”