Leaving Newcastle behind it wasn’t long until we came to Port Stephens. This isn’t a town, but an area, which is made up of a few nice costal villages. We arrived first at Anna Bay and stumbled upon a beach called Birubi Point. 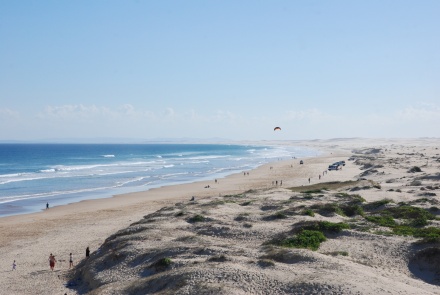 Being a Sunday the place was overrun with tourists, and I could see why they were all here. The beach was long and beautiful running off far into the distance. But even more spectacular, were the Sahara style sand dunes that backed it. They were huge and seemed to go on forever.

Down in another parking lot were camels, advertisements for sand boarding, and 4wd buses taking tourists over the dunes.

Chris and I decided to set up camp. The surf here was great for learning, nice waves but not too big. There were modern toilets with good showers, and the car park was well lit at night.

By the time the sun set all the tourists had left leaving just us and a ‘Jucy’ Camper with a couple of younger German boys in it. They didn’t say much to us other than to warn us they’d just killed 2 red back spiders.

I went to investigate and found a couple under the bins.

We cooked some dinner when another car arrived. Being in these situations I can’t help but feel wary. We watched as a guy got out, wearing a brightly coloured hippy hat, and walked past us to the beach. On his way back he stopped to say hi, commenting on what a beautiful night it was and introduced himself as Ryan from the USA. He said he planned to camp on the beach.

For the next few days we got into the routine of eating, surfing, chilling out, and reading. And we found that as the weekend was over, there were nowhere near as many tourists, which suited us just great. 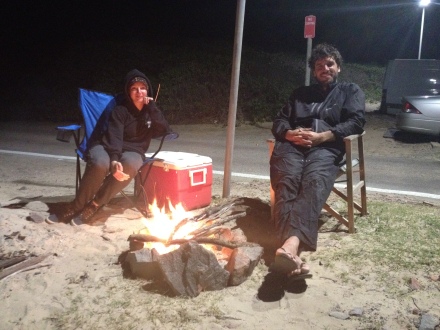 The 2nd day we were there Ryan came over to announce he was going to build a fire and that we were welcome to join him. This sounded like an awesome idea! Although the days were pretty hot it could still feel cold at night, especially with the sea breeze. So we made some dinner, poured some wine, and went over to join him along with a couple of girls from Germany.

We’d only been sitting by the fire 10 minutes when a police car came ripping into the car park lights flashing. ‘Shit’, I thought, ‘someone must have told them about the fire’. 2 officers jumped out of the car and said, “We’re just letting you know, there’s a man in his early 20s running around with a machete knife. If you see him keep your distance and call us immediately! He has no top on.” We all looked at each other, wide-eyed in shock. That was the last thing we were expecting!

The police officers assured us he shouldn’t make it as far as us, and that there were lots of cops about so we were safe. Luckily the topless knife carrier didn’t appear that night.

We spent another night hanging out with Ryan around the fire. It was nice getting to know another traveller and sharing stories. And when Chris asked Ryan how old he was, we found out not only was he the same age as Chris, but that they were born about 12 hours apart. Freaky.

It was our 4th day at Buribi Point when we thought we should get moving. We spent a couple of days driving around the rest of Port Stephens. There was awesome surf at One Mile Beach, Salamander Bay had an Aldi to buy cheap food, and Nelson Bay was a cute town with a marina and good view points.

I also loved this red flower that seemed to be everywhere in Nelson Bay, but I haven’t seen anywhere else.

Reluctantly we left Port Stephens, knowing that there was possibly great places ahead of us.

I’d heard the name Seal Rocks mentioned over and over again by locals and other travellers. Apparently this was a beautiful place to go with isolated pristine beaches and amazing surf. So after hanging around Port Stephens for the best part of a week we decided to get moving up the road to check this place out for ourselves.

And yes, if there’s one detour you should take off the highway it’s to Seal Rocks. Being in the Myall Lakes National Park, there’s not much here other than beaches, a few houses, and some campsites. It has such a relaxing and laid-back atmosphere to it, this is where people come to get away from it all and do very little. 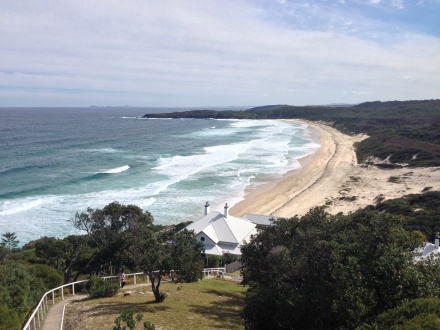 We went to the Sugarloaf Point Lighthouse, which gave great views of Lighthouse Beach, and then had lunch on another, more sheltered beach, where we could see dolphins lazily popping their heads up in the water.

After lunch, we turned down one of the worst unsealed roads I’ve ever seen, and slowly made our way along looking for the surf beaches. These weren’t the easiest to find, the signs weren’t the clearest and you could never see the beach from the car parks, instead you had to walk through forest trails to reach the sea. This turned out to make things a bit exciting however, as each beach was so different and you never knew what to expect!

We’d really built up our expectations for this area in regards to surfing, especially when we came across Treachery Beach, one that another surfer had advised we go to. But it just wasn’t the right conditions. Each beach we checked was extremely choppy and rough and didn’t seem to have anyone surfing at them. So reluctantly we gave up, finding a sneaky car park to sleep in for the night.

We decided we would spend one more day at Seal Rocks before leaving to try and find some beaches with better surf!