After 4 days in Sydney Chris and I were looking forward to getting away from all the people and traffic by escaping to the Blue Mountains.

We drove for 2 hours along the Great Western Highway before arriving at Katoomba, the chief town in the Blue Mountain area. I suppose I should have realised that, being so close to Sydney, the Blue Mountains wouldn’t have that isolated, middle of nowhere feel to it. But still, I was a bit surprised by the amount of work and money that must have gone into this huge motorway. As we turned off, it was hard to imagine we were right next to a national park.

Once in Katoomba we followed a tourist drive that took us to various lookouts, including Echo Point where the famous Three Sisters can be seen. This is where the I site is, along with a massive 2 level viewing platform. There were hundreds of tourists everywhere excitedly fighting for position in front of the three rocks, snapping landscape pictures and selfies.

Chris and I set up our camera to the side to get timelapses and then got our own photo when things quietened down for a bit.

We checked out the other lookouts in the area. I think my favourite was the ‘Landslide Lookout’. There’s no carpark, and from the sign you have to walk about 200metres down a small path. Not many people seem to stop here and once there it’s easy to slip past the lookout barrier to a ledge, which seemed pretty safe to stand on. 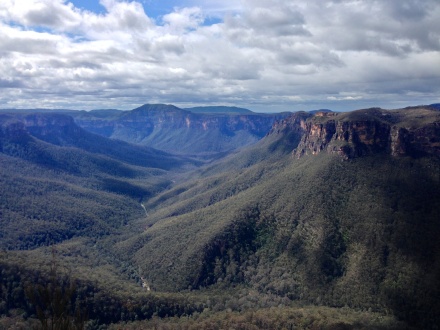 The next day we drove to Blackheath and explored the lookouts around this smaller town. To me these views were even more spectacular with way less people around. Some were harder to find and involved driving along unsealed roads, but it was definitely worth it to experience the landscape away from the crowds.

Ones to check out are Evans Lookout, Govetts Leap, Perrys Lookout and Anvil Rock.

One thing I wish I’d taken advantage of while at the Blue Mountains were the walks. There are so many, both day and multi-day, that take you between the view points providing pretty breath taking scenery. Chris and I walked a short part of one, climbing down steep stone steps and up ladders that hugged the side of a cliff face. With the weather being so inconsistent, sunshine one second, pouring rain the next, we didn’t fancy going much further. Maybe we just need to harden up a bit!

2 thoughts on “The Blue Mountains”