The road trip videos continue. Adventures through Lennox Head (unfortunately not us surfing) and Byron Bay, before staying with an Aussie family in a cute wee place called Little Pocket near Brunswick Heads. There, we helped look after Tiger, Townsie (2 awesome kids), and baby Roux, as well as helping out Bec and Trent in the garden. Then it was time to continue our journey to the Gold Coast and Brisbane.

Going back a bit here but I’ve finally go around to making my 2nd Aussie Road Trip Video. This was all shot in NSW from the Blue Mountains to Evans Head. After the Blue Mountains there were just so many beaches, viewpoints, and national parks to see. I also loved the wildlife I came across along the way.

Our flight got into Brisbane pretty late so we spent the night freedom camping on a residential street near the airport and then got up early the next day and drove straight to Tweed Heads, which is more or less the start of the Gold Coast. This is where the first lifeguard hut is (I think there’s 39 up the coast)! 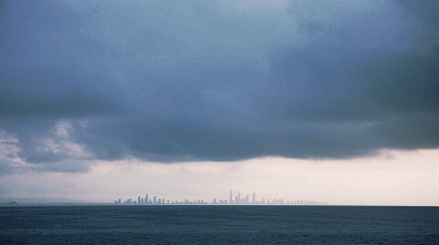 My first impressions of Tweed were good. The high rises hadn’t quite started yet, it wasn’t busy at all, and there were great views of the Gold Coast skyline across the water. It was also pretty random how the boarder between NSW and Queensland runs straight through Tweed. I didn’t know which time to go by! 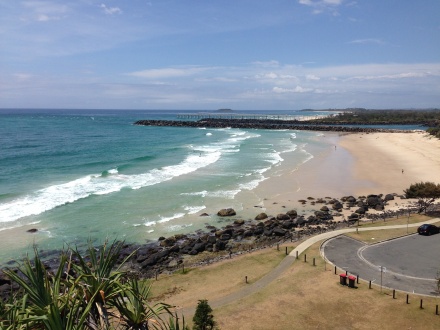 Once there, Chris and I went straight to Snapper Rocks, which is apparently an epic point break for surfing. Although not on this day it wasn’t…. With the waves looking tiny and mushy we gave surfing a pass and instead, went for nice walk around the point, taking in the views.

END_OF_DOCUMENT_TOKEN_TO_BE_REPLACED

Feels like a lifetime ago I was working on a dairy milking cows. This is a video Chris and I made showing a day at work. It starts with Chris driving around mixing up the cows food and feeding it out to them, then it’s me milking the cows and feeding the calves! As far as backpacker farm jobs it was definitely a different experience.

Bec came out to greet us and then brought us into the house to meet Tiger and Townes. Trent and his band were playing at a music festival but would be back soon. It’s been a while since I’ve been around kids! But it wasn’t long until they had me and Chris outside playing with them on the trampoline in their garden. So much fun but totally exhausting! END_OF_DOCUMENT_TOKEN_TO_BE_REPLACED

Byron Bay. It’s a backpackers haven. A place where people plan to stay a week but somehow end up staying for months. They arrive clean cut and wearing shoes but somewhere along the way find they’re barefoot and have grown dreads.

When there’s so much hype about a place it instantly makes me feel sceptical about it, and so when Chris and I left chilled out Lennox Heads and drove up the road to Byron I wasn’t sure if I’d like it at all.

But it’s hard not to like the place! On one of the roads into the town is a sign saying ‘cheer up, slow down, chill out’, and that says it all.

The bustling little beach side town is busy and full of people, all ages and from all walks of life, just coming together to enjoy that feeling of freedom that Byron seems to give. Walking through the streets there’s organic foods, hippy stores, smells of incense in the air, street art. There’s such a high energy about the place and a good vibe, it’s impossible not to enjoy yourself.

As the sun starts to set buskers take to the streets. A drumming circle by the main beach car park, fire dancers in the park, and guitarists on street corners playing as crowds gather to sing and dance along. With a few drinks in you just walking the streets is an experience in itself. END_OF_DOCUMENT_TOKEN_TO_BE_REPLACED

I could have happily stayed in Yamba and surfed at Pippi’s beach every day for the next month, but no matter how good a place is I always get that nagging feeling that there might be somewhere better up ahead. It’s not a bad thing, otherwise I’d probably never get anywhere!

We left Yamba and went to the next town, Iluka, which is just over the river but takes a while to drive to as there’s no bridge. This was a strange little place with quite an eerie feeling to it. There didn’t seem to be any tourists about and the locals were all the fishing types who enjoyed to drive their 4WDs on the beach.

We spent the night in an empty beach car park and while we cooked dinner there was a crazy thunder storm. We fried up burgers as lightening flashed above us but luckily by the time the rain came pouring down our burgers were cooked.

In the morning we were awoken by a lovely local who thought it was funny to drive up close to us and beep his horn! I’ve heard that sometimes locals in certain areas aren’t too keen on sharing their beaches with tourists.

Taking the hint we got up and I thought I’d give barefoot running on the beach a go. I ran about 3 miles and it felt great! Until I got back to the car and realised my big toes had massive blood blisters on them! I think it will be a while before I try it again. 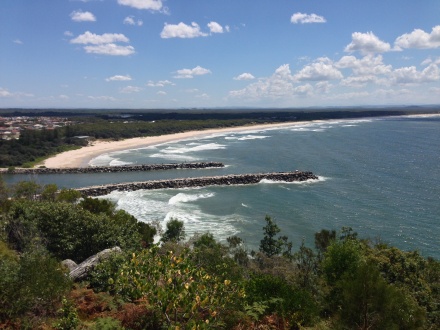 The next stop was Evans Head, which was a nice enough wee town with a good surf beach. When we first arrived it was pretty hot and I just wanted to find somewhere to chill out for the day. So we drove a bit out of Evans Head to the Bundjalung Naitonal Park where we found Chinaman’s Beach and a half naked girl walking around her campervan with her boobs out.

She looked really young to be a naturist so I thought good on her! But as the day went on she appeared to keep her boobs hidden in a bikini, so maybe we just caught her at a bad time in-between outfits…

END_OF_DOCUMENT_TOKEN_TO_BE_REPLACED

For the past few months we’ve been crawling at snails pace up the coast, stopping to surf at any beach with a hint of a ride able wave. It is kind of getting to that point now that there’s just beach after beach, I’m starting to lose track of where I’ve been and when, sometimes it all just seems the same!

Don’t get me wrong I’m not complaining! I’ve come across some of the most beautiful beaches I’ve ever seen! But I suppose the East Coast just lacks a bit of variation, when you’re moving up it so slowly that is. 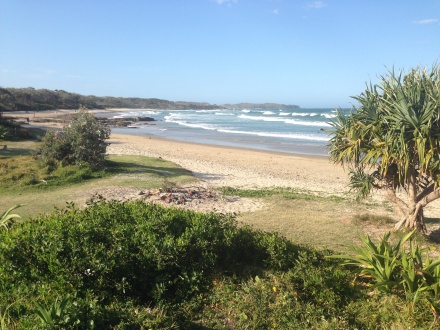 After Coffs Harbour we stopped off at every beach in our path looking for waves. Moonee, Emerald and Sandy Beach, all nice places but not much to do other than go to the beach.

When we reached Woolgoolga the town seemed to have a bit more to it. It has a large Sihk community, which meant lots of Indian restaurants and smiley, friendly, turban wearing people.

We slept right next to a holiday park in a day use area that said ‘no camping’. But there were a few other campers there who looked like they’d been around for a few days, so we took our chances.

That night just as the sun was going down we heard a lot of flapping and commotion above our heads. I looked up expecting to see a load of birds but instead, was surprised to see literally hundreds of fruit bats flying through the trees and hanging from the branches. They were massive!

Then after dinner we had an inquisitive kookaburra hanging around. We were able to sneak up close enough to get some good photos of it.

END_OF_DOCUMENT_TOKEN_TO_BE_REPLACED

From Port Macquarie we drove on to Crescent Head, Australia’s longboarding capital. At the time it was school holidays and the place was absolutely packed! We drove down to the beach front where there was a holiday park full of tents, caravans and holidaying families.

The beach was nice with small but clean waves coming in, and I would have been tempted to go in for a surf, if not for the amount of kids and adults fighting over the waves. I was fairly entertained watching one guy on his longboard, who would be happily cruising along a wave, only to get cut off by some surfer dropping in on him. Every time he’d throw his arms in the air with an exasperated look on his face. 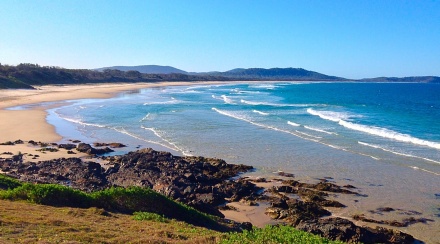 The next day the crowds were back fighting over the waves so we decided to drive away from Crescent Head along Plomer Road in search of uncrowded beaches. We’d driven less than 10km when we came across a campsite with showers and access to a quiet beach with decent waves. This was more like it.

END_OF_DOCUMENT_TOKEN_TO_BE_REPLACED

Failing to find the surf we were hoping for at Seal Rocks the mission continued as we drove up the coast. We went through Pacific Palms only to find the beaches were too advanced. Boomerang Beach looked awesome but I was happy to just watch as the surfers rode massive waves within centimetres of submerged rocks.

By the time we made it to Forster we’d pretty much given up on surfing. The beaches here were more the swimming type. So instead, we just enjoyed hanging out in the little town and even had a go at hand washing our clothes.

We seemed to get a lot of strange looks, hasn’t anyone ever seen 2 people doing their washing before?! 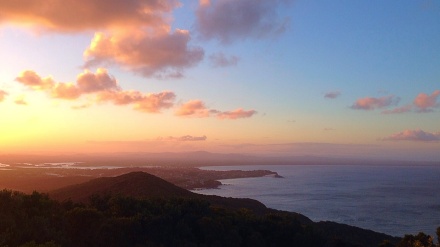 We also checked out the Cape Hawke Lookout. After climbing up 400 odd steps through regenerating rainforest we found ourselves at the bottom of an 8 metre tower. Up the tower you can get above the trees to see a 360 degree view of the surrounding area, worth every step. END_OF_DOCUMENT_TOKEN_TO_BE_REPLACED