I could have happily stayed in Yamba and surfed at Pippi’s beach every day for the next month, but no matter how good a place is I always get that nagging feeling that there might be somewhere better up ahead. It’s not a bad thing, otherwise I’d probably never get anywhere!

We left Yamba and went to the next town, Iluka, which is just over the river but takes a while to drive to as there’s no bridge. This was a strange little place with quite an eerie feeling to it. There didn’t seem to be any tourists about and the locals were all the fishing types who enjoyed to drive their 4WDs on the beach.

We spent the night in an empty beach car park and while we cooked dinner there was a crazy thunder storm. We fried up burgers as lightening flashed above us but luckily by the time the rain came pouring down our burgers were cooked.

In the morning we were awoken by a lovely local who thought it was funny to drive up close to us and beep his horn! I’ve heard that sometimes locals in certain areas aren’t too keen on sharing their beaches with tourists.

Taking the hint we got up and I thought I’d give barefoot running on the beach a go. I ran about 3 miles and it felt great! Until I got back to the car and realised my big toes had massive blood blisters on them! I think it will be a while before I try it again.

The next stop was Evans Head, which was a nice enough wee town with a good surf beach. When we first arrived it was pretty hot and I just wanted to find somewhere to chill out for the day. So we drove a bit out of Evans Head to the Bundjalung Naitonal Park where we found Chinaman’s Beach and a half naked girl walking around her campervan with her boobs out.

She looked really young to be a naturist so I thought good on her! But as the day went on she appeared to keep her boobs hidden in a bikini, so maybe we just caught her at a bad time in-between outfits… 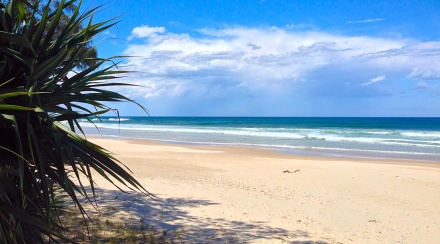 Chinaman’s Beach was exactly what I needed. It was absolutely stunning and peaceful with not a lot of people about. We took a walk to the beach but spent most of the day doing nothing, just chilling out in our campervan with the doors open. The half naked girl looked like she was with her boyfriend, and they were the only other campervan in the car park.

The next morning, after having another local beep his horn at us, we were up and eating breakfast when a ranger appeared. “You know you can’t sleep here don’t you?” he stated to us. “Yes,” we said, neither confirming nor denying that we’d actually spent the night. He then walked over to the other couples van, sighing as he knocked on the door to get them up. ‘And so it begins’ I thought. Until now freedom camping had been so easy! But I had guessed the closer to summer we got the harder things might become.

That morning we got to know the campervan couple a bit, talking about travelling, work and surfing. They were both 19, from Denmark, and seemed to spend their days skateboarding, learning how to surf, writing quotes and pictures on the outside of their van in permanent marker, and cutting pictures out of magazines to decorate the inside of their van.

After chatting we said our goodbyes and went for  a proper walk along Chinaman’s beach, right to the end where we found another hidden beach.

It was beautiful and quiet and all along the shore were blue jellyfish. This worried me a little, I didn’t like the idea of surfing with jellies! But apparently they don’t give too bad a sting, and sometimes their sting doesn’t hurt at all.

After our walk we left the national park and went to check out the main beach at Evans Head. Looking out I felt so excited. I’d never seen such clean breaking waves! We shoved some lunch in us and got in the water with our boards asap. But apparently half of Evans Head decided to do the same, because before we knew it we were fighting over the waves with about 15 other people, as well as a million jellyfish.

This really freaked me out! I was terrified of falling off my board in case my face got stung! As I caught a wave and surfed it in I looked down to see jellyfish after jellyfish beneath my board. At one point I was paddling when my hand brushed against one, but luckily I didn’t feel anything.

The fun lasted for about 30 minutes when the wind changed and the waves went crap. One by one the other surfers left the water. And surprisingly there were no jellies anymore too! Chris and I stuck at it a bit longer before calling it a day.

We left Evans Head and drove into Ballina, not spending too much time here other than to check out the giant prawn, go to Aldi and get some petrol. It really is just a place to restock. There are surf beaches here but we were eager to continue on to Lennox Head, another surfing reserve and famous for it’s point break.

We arrived at Lennox Head later in the day and went straight to a view point where you can get good views of the point break as well as the sweeping bay of Lennox Head. Out of laziness we decided to sleep here, disregarding the no camping signs.

In the morning I’d just woken up when Chris whispered that a vehicle had pulled up right behind us. Peeking through the curtains we saw 2 council wardens get out and check us out. They didn’t waste much time before rapping on the window. Dammit!

We opened the door to a young guy who handed us a sheet containing guide lines on ‘no camping’ and reeled off his speech about why we can’t sleep here. He said we didn’t have to leave but had to get up and open our curtains. The other, older, guy remained quiet until the end when he said, “And don’t go back to sleep! We will come back and check you know.” So yes, things were definitely going to be harder from now on!

We spent the morning watching the surfers at the point and took some video footage of them. It looked like a lot of fun but I was happy to just watch. The waves were breaking in towards rocks and there were a lot of surfers in the water, many of them locals, who I’ve heard you don’t want to get on the wrong side of in the water. 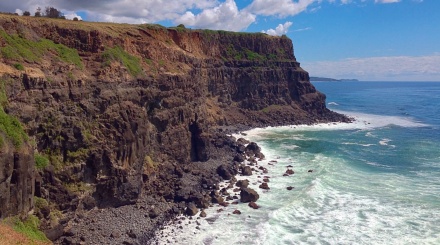 After we went for a walk around the area, which took us up to a view point and then along a headland, giving great views.

While the point was too advanced for our surfing skills the main beach was not. So after lunch we went in for a surf.

We spent the next few days at Lennox, sleeping in residential areas to hide from the council wardens, and getting up early to surf at the main beach.

We found that the mornings were best. Nice and early the water would be beautiful and glassy with the sun gleaming down on it. The waves would come rolling in, peaking out of the glass. There’s no better feeling than being out in the ocean when the conditions are like this! But it wouldn’t be long before the wind would change and before you knew it, it would be a choppy mess by early afternoon.

One thing I loved about the morning surfing is seeing all the locals. There were old Grannies on their long boards, guys literally running from their cars to get in as quickly as possible before work, and kids having a surf before school. It’s not a bad lifestyle!