After spending 23 months in New Zealand it was time to move on.  I’d always decided I’d go to Australia after New

Zealand, even though I’ve never been overly excited by the idea. To be honest I’m more excited about the money I can save rather than the experience. That being said, when it came to it and I touched down in Melbourne, straight away I had a good feeling about the place.

I arrived late at night, 1am, but the city still had a bustling atmosphere to it, something that Auckland in New Zealand always lacked. With 4 million people the city is pretty huge; but the trams, buses and trains make it easy to get around. I instantly liked the feel of Melbourne. It’s full of parks, most of the streets are lined with trees, and the different building styles and architecture give the city a more historical feel. It seems there’s always something going on, whether it’s exhibitions, live music or outdoor cinema.

When you first arrive in a new country it’s easy to spend a lot of money, which can often lead to stress, which can stop you from just living in the ‘now’ and enjoying yourself. With this in mind I thought I’d give couchsurfing a go for the first time, a way to both save money and also meet locals.

Couchsurfing is an online community of travellers and hosts. Basically, people who have a spare couch/room/patch of carpet allow travellers to stay for free. They don’t usually expect anything in return, just that the person is clean, respectful and sociable. For most couchsurfers it’s more about meeting people from other countries, not just a free bed for the night.

My first hosts were a couple called Luke and Sophie and arriving at their home was an experience in itself. They’d spent the weekend partying and things were still in a bit of a mess. There was a half naked girl and guy asleep in the living room, and 4 other couchsurfers upstairs. Chris and I made ourselves a coffee and went to sit in the garden. A guy came out to join us, introduced himself, and asked us if we lived there. This became the ongoing joke as the house seemed full of couchsurfers, random people, as well as the unfortunate people who actually lived there, and no one seemed to know who anyone was! People just kept appearing. It turned out that this guy in particular had met one of the other couchsurfers at a bar the night before and the rest was history… 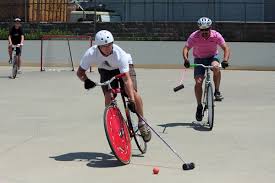 But Luke and Sophie were great, we talked about travelling, couchsurfing, wwoofing and Melbourne itself. There’s no better way to find out about a city than to ask the locals. That afternoon they invited us to watch a bike polo tournament at Flagstaff Park. Best way to describe the sport is it’s like the game they play on horses, except bikes are used instead. I was so impressed by the skills the players possessed, dribbling the ball alongside the bikes around the netball court to shoot into a small net similar to ice hockey. Luke explained he’d usually take part, but had broken his hand playing the weekend before so had to sit this one out. That night we met up with a friend we’d known from New Zealand, Mike, and went to an open air film festival in the botanical gardens, a free event Luke and Sophie had told us about, which we wouldn’t have known about otherwise.

Out to the Country

We could only stay with Luke and Sophie one night, but luckily the next day another host replied to my couch request.

Kieran said he couldn’t help us out as he didn’t have a house at the minute, but that he was going to stay with his parents in a place called Castlemaine, and we were welcome to join him. He said his parents were also couchsurfing hosts and it would be fine. So we met Kieran at a train station and he drove us out into the country.

We’d never planned to stay anywhere outside of Melbourne but I’m so glad we did. We arrived at the family home, which they’d built themselves, to be greeted by two horses and a mob of wild kangaroos. Kieran showed us around the vegetable garden, pointed out the different native trees around his land, and then cooked us kangaroo steaks for dinner. When his parents, Elaine and Lindsay, came back from work they were unbelievably welcoming. They told us to help ourselves to anything in the house and make ourselves at home. During the day Chris and I were left to our own devices where  we relaxed in the house and made an unsuccessful attempt at horse riding, and at night Elaine and Lindsay would come home, open the fridge, hand us a beer, and give us advice on travelling in Australia. We stayed there 4 nights before we said our goodbyes and headed back into the city.

There’s just so much going on in Melbourne

“There’s just so much going on in Melbourne” is one of the most repeated phrases I’ve heard, and you know what, it’s true. We got back to the city, booked into a hostel, and got ready to go out for the weekend. It was Friday night and we were heading out to see Chic and Nile Rodgers, a pretty funky group from the 70s. The sold out gig was at an intimate club venue and after being in New Zealand for the past few years it was just amazing to be able go to an event like this, which is just the norm in Melbourne. The place was full of people and we danced all night till about 3am, before grabbing a cheeky kfc and getting a bus home. The next night we met up with an old school friend of Chris’s, and went for a bar crawl around the city. We went exploring through Melbourne’s alleyways and lanes to find quirky bars tucked away playing live music, and then had a drunken feast at a cheap restaurant in china town. There’s so many hidden gems around the city, you’d probably have to live there for a while to really know where where the best clubs and bars are to make the most of it.

Museum. My phone rang and on the other end was English Chris, a couchsurfing host originally from england, who’d moved to Australia 15 years ago. We just needed somewhere to stay until Thursday before we went to our next stop, Adelaide, and English Chris said this was fine, all we needed to do was bring him a few beers.

We took a train to a suburb called Reservoir and as we approached his house we could hear loud music and laughter. English Chris greeted us and took us around the back of his house where we were introduced to 3 other couchsurfers from Germany and USA.   Lewis, Max and Drew had been living at there for 3 weeks and gave English Chris some rent money each week. I realised pretty quick the four of them spent their time drinking, talking crap and listening to music. But hey, it was all good fun and English Chris, who was 51 and a single Dad, was a nice and a very genuine guy.

Over the next few days Chris and I would get the train to Melbourne each day to see more of the city, and then come back at night to join in with the party.

When English Chris had his son come to stay we put our tent up in the garden and slept there instead of the spare room. To say thanks we bought his son chocolate and shared beers and wine with Chris every night.

The day we left was Chris’s birthday, and we’d had a pretty messy night the night before to celebrate the date. There’d been pool competitions, table tennis, some ‘interesting’ dancing, and Chris had stripped off and jumped in a giant blow up paddling pool he’d bought to get through the hot summer days. As a gift and to show our appreciation, we bought him a birthday cake and bottle of wine.

With couchsurfing you never really know what you’re going to get, but that’s what makes it great. You meet so many

people and experience places in such a different way. The only problem is once you start, you’ll never be happy staying at a  hostel again.