the same time.  After doing a bit of research I decided that Samoa seemed like a good option.  The country’s two main islands appeared easy enough to travel around and the flights, although not cheap, are cheaper than Fiji.

Chris and I arrived into Apia, Samoa’s capital, at 9.30pm on a Tuesday night.  As we stepped off the plane and were hit by hot humid air we smiled at each other.  Finally some hot weather! We collected our bags and went out to the arrivals area expecting to be met by a Kiwi man, Dennis, who would drive us to his accommodation.  However, Dennis was nowhere to be found and instead, there was a row of Samoan taxi drivers all fighting for our attention.

I tried to tell one man that I didn’t need a taxi and that I had a ride.  But he wouldn’t leave me alone, he kept asking where I was going and who was meeting me.  I turned my back on him and walked away but he followed.  Eventually he desperately said, “Please!  Let me help you, I’m just trying to help.  Do you have a number and I’ll call him!”  I stopped, totally surprised. I’ve been to countries before where I had to deal with persistent and annoying taxi drivers, just like in Samoa, but usually they’re only trying to get you in their cab and not interested in helping.

Still suspicious, I gave the taxi driver Dennis’s number and watched the man call him.  He then passed the phone to me and I heard a Kiwi voice on the other end.  “Hello,” I said, “Em, it’s Vicki, we’re at the airport…. where are you?”  Dennis asked me to give the phone back to the taxi driver and then it was handed to another man named Tau.  He spoke a few words to Dennis before hanging up and walking over to us.  “Don’t worry,” he smiled, “I’ll drive you to Dennis’s.” I could only assume that Dennis had forgotten about us.

It was this first experience that showed me the endearing characteristic the majority of Samoans seem to have.  The desire to help others.  Throughout my whole time in Samoa locals were constantly on hand to help, even when they could barely speak any english.  If you’re standing at the bus station with a confused look on your face, feeling a bit overwhelmed by the lack of organisation, someone will come over and ask you what bus you are looking for.  If you’re walking through a village and look a bit lost someone will approach you and point you in the right direction.  Although, saying all this, with the language barrier and the Samoan ‘eager to please’ attitude, it’s maybe best to ask at least two people before settling for an answer.

As Chris and I moved around the two main islands, Upolu and Savai’i, it really was the

people that made it for me.  No matter where you are; in a cafe, on a bus, walking along the road, people will wave at you, beep their horn as they drive past you, and shout malo (hello) before starting up a conversation.  As a palagi (white person) you stand out, everyone notices you, and most people seem really interested in where you’ve come from and why on earth you’ve travelled to their country. 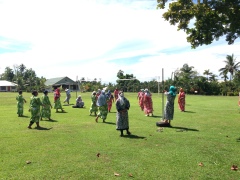 To me, the Samoans come across as generous people, for instance, many will swap and share their food rather than sell it.  For two nights we stayed at a place called ‘Joelans Beach Fales’ where we got our breakfast and dinner included in the price.  But each day, one of the girls would come and call us for lunch, at no extra cost. And as time went on we found it’s not uncommon for Samoans to invite you to their house for dinner, or even to ask you to stay with them as their guest.  Chris and I got a few invites during our time there, and I still can’t believe that due to certain circumstances or bad timing we couldn’t take people up on their offers.

What I’ve written is just my initial impression of how the Samoan people come across to a palagi who’s just stepped foot in Samoa for the first time. I know it’s not as black and white as it seems and there’s much more to their culture. But during my holiday it was the random conversations, the smiles and the waves from strangers that made it for me.