another trip to Melbourne. The main reason was to see an AFL game (Aussie Rules football), and where better to experience this than at the Melbourne Cricket Grounds stadium (MCG). But we also had plans to do some shopping, catch up with our friend we met in NZ, Mike, and go out partying.

We arrived at Reservoir, a suburb of Melbourne, late Saturday afternoon and found somewhere to park near the railway station. We decided to leave the van there and booked to stay at the Elizabeth Hostel in the city centre, where our friend Mike is living. Usually I’m all for freedom camping and will do anything possible to avoid hostels, but we’d tried out freedom camping in Melbourne before, only to wake up in the morning to find a council officer at our window. She was friendly enough but gave us a stern warning that next time there could be a $200 fine.

Before heading to the hostel I decided to go shopping. With backpacking I’m always mindful of saving money and travelling light, and because of this it’s been over a year now since I’ve bought new clothes! In hindsight choosing to shop in Melbourne when it’s been so long probably wasn’t the best of ideas.

Thousands of stores to choose from, thousands of people rushing around, I found myself walking in a daze not knowing where to start, where to look. Girls surrounded me dressed in the latest fashions, excitedly grabbing clothes off the rails. The smells of peoples perfumes were so strong I thought I was going to pass out. At first I couldn’t help but feel panicy! But at the same time it was good to be amongst so many people again, the atmosphere seemed electric in comparison to the sleepy town Deniliquin where I usually spend my days off.

With the shopping trip a success I met up with Chris and we checked into our hostel. The Elizabeth Hostel is far from one of the best I’ve stayed in. It feels a bit grubby, has paper thin walls, and although there’s free internet, it’s less than 1 mega bite download speed! But for being so central it was pretty cheap and Chris and I decided to go all out and get a private double room.

We met up with Mike and went straight to our room to get on it. Chris and I had the bright idea of buying a bottle of bourbon. It had been so long since we’d been out drinking and clubbing so we wanted it to be a good night. We tried mixing it with energy drink otherwise there was no way we were going to last the night. During the week we get up at 3am for work and are usually in bed by 10pm, so we were on completely the wrong time line for enjoying Melbourne at night.

We left the hostel at about 11pm and headed to Section 8, a cool outdoor pop up bar near china town. They had a huge visual playing on a 40ft wall while DJs banged out funky house music. We had a few beers and a bit of a boogie before jumping on a tram and heading out to St Kilda. There was a popular club there that Mike wanted to try out.

We hadn’t been on the tram long when I started to fall asleep, the energy drink had failed me. Chris and Mike woke me up when we arrived at our stop but as soon as I stepped off the tram and the fresh air hit me I was overcome with nausea and could do nothing but throw up right there on the street. Chris and Mike tried to cover me from view from any passers by, all I could think is what an epic fail. But I wasn’t going to let a wee bit of sick ruin our night. So I sorted myself out and we headed into a bar.

No idea who this ransomer is…

On the way in I found a pink slip on the floor. “What do you reckon this is?” I asked Chris. “Maybe it gets you a free drink,” he replied. So I handed it to the bar staff and was handed back a free glass of champagne. “Think you’d be better off with a water than that!” laughed Mike. So I handed the champagne to Chris and downed some water instead.

We left the bar and went to go to the nightclub Mike was eager to check out. There was a long queue outside with 2 serious looking bouncers meticulously checking every person’s ID. And suddenly I realised, no, I’d forgotten my ID! I went to the front of the queue and asked the bouncer what was the chance of getting in without it, “none,” he said without a smile. Across the road was a gay club, music absolutely pumping. So we ran across to try our chances there. Miraculously I was allowed in! But it was a $20 cover charge…. No way any of us were going to pay that.

We stood around not sure what to do, and then Mike had the great idea that we could get a taxi back to the hostel, get my ID, and then come back. It was now 2.30am but we all agreed this was a good plan. But as soon as we got back to the hostel I made the mistake of lying down, and that was it, there was no way I was going out again.

I woke up in the morning still fully dressed from the night before, always the sign of a good night! I just hope Mike wasn’t disappointed by our sad attempt.

Sunday was the day of the AFL game but we had a whole day to kill as the game didn’t start until 4.45pm. We started things off with a greasy fry up to try and cure the hang over we all had, and then Mike suggested we check out the Eureka Sky Deck.

At 300metres Eureka is the highest building in Melbourne and the viewing platform is the highest in the Southern Hemisphere. The glass on the top 10 levels is 24 carat gold plated, a pretty impressive building. Reluctantly we each paid $19.50 to get up to the viewing deck where we were greeted with 360-degree views of Melbourne. It was a nice way to see the city, although I think they’re taking the piss a bit charging that much. We could have paid another $12 to go out to the ‘Edge’, a glass cube that overhangs the side of the building, but I think we’d spent enough money.

AFL at the MCG

After this it was time to head to the MCG to see Melbourne vrs North Melbourne in the AFL. The Aussies are mad for Aussie Rules Footie, often it comes first before rugby and the people here are very proud of their sport. I wasn’t going to miss the opportunity to see a game because what other country will I get the chance. I can watch rugby or football anywhere in the world, but this unique game is still an Aussie only affair.

The MCG is an impressive stadium, it holds just under 100,000 people and hosts cricket in summer and Aussie Rules Football in winter. As this was a category C game there were a lot of empty seats, but this suited me just fine as I’m not a fan of massive crowds. The fans were still extremely enthusiastic with the majority of people dressed in their supporting colours and there was a great atmosphere.

As it got closer to kick off time more seats began to fill and I could hear the excited chatter of fans around me, talking about the teams, the players, what the expected outcome was. Finally the time came and a group of people came out onto the circular pitch holding up 2 massive flags representing each of the teams. An old fashioned song played over the speakers and Melbourne came running out onto the field from under and around their flag. Then it was North Melbourne’s turn to an equally funny old song.

It was time for kick off and I saw a total of 8 umpires take up positions around the field. I suppose when there’s as many as 18 players on each side more umpires are needed. One umpire took the rugby shaped ball and bounced it off the ground as hard as he could and the players were off, jumping in the air and fighting for the ball. The best way to describe what I saw from here is a mixture between rugby and Gaelic Football.

Luckily before the game I checked out the rules on wiki, otherwise I don’t think I’d have had a clue what was going on. Some of the rules appear pretty strange and even comical at times to an outsider. For instance, to pass they have to hit the ball out of their hand with their palm, every 15 metres they have to kick, pass or bounce the ball off the ground, and throw ins are down by one of the many umpires where they turn their back to the players and wing the ball as far as they can over their head. In a way it reminded me of when I was a kid playing football with my mates and we’d sometimes make up rules to make it more exciting. 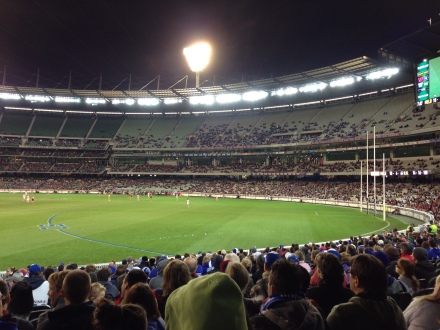 The game was split into 4 quarters, each 20 minutes long excluding stoppage time for injuries, goals etc. So in reality each quarter usually lasted about 30minutes. A pretty long match but I was fairly entertained so didn’t mind. At each end of the pitch there were four posts where the players had to kick the ball through in order to score goals. If they got it through the middle posts they got 6 points, if it went through the outside posts it was 1 point. This led to an exciting high scoring match where things could change very quickly. But as the match went on North Melbourne started to run away with it and went on to win fairly easily.

Over all the game was very fast moving, high scoring and really exciting to watch. At $25 for a general admission ticket it was an absolute bargain, think I’d definitely go to another match if the chance came around. But my favourite thing about AFL would have to be the players. Tall, slim, toned and athletic, not bad at all on the eye 😉

As always Melbourne was a breath of fresh air after living in rural isolation. I don’t know if I’ll be back there again, after all there’s so much more of Australia to see, but I really do love the city.