It had been 2 weeks since Chris and I had bought our campervan and we’d somehow managed to spend all that time hanging around Adelaide. We caught up with a friend, did some couch surfing, and got away with freedom camping at different beaches. But we were both getting that impatient feeling and we wanted to explore and see more of this massive country. So as soon as our car inverter and Camps7 Book arrived in the post from Ebay, we were off.

From Adelaide we drove to Mount Gambier. This isn’t the prettiest of towns but we quickly bypassed it to follow a winding road taking us up above the town to the main attraction, a vibrant blue lake. The colour was striking, and apparently it’s only like this during the summer months, December- March, each year. Any other time it just looks like a normal lake. Something to do with calcite crystals suspended in the water, which form at a faster rate during the warmer months.

That night we put our Camps7 book to use. This is an amazing book that anyone with a campervan should own. It shows all the free and cheap campsites around Australia, giving the location and information for each one, as well as roadmaps for each state. The sun had set and the book led us into a forest and down an unsealed dirt road. There was an eerie isolated feel to the place but as we turned the last corner, even in the dark we could see that the camp area was full of campers, all shapes and sizes. The place was dotted with campfires and had a peaceful atmosphere with the sound of low conversation.

In the morning when we woke we could really take in our surroundings. A beautiful, natural, peaceful forest camp with wood fire BBQs. But we could also see the black charred trees all around us, a reminder of a recent bush fire. This, along with a fire warning poster on an information board, made the bush fires you hear about on the news seem all too real. 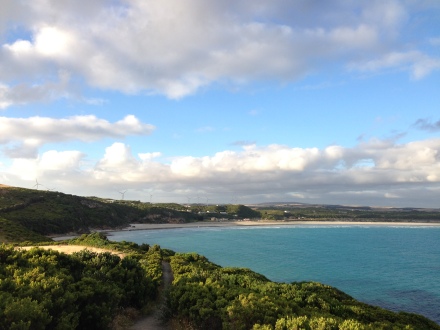 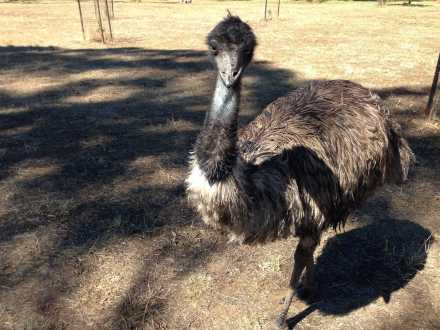 We then got back on the road and started heading towards the main part of our road trip, The Great Ocean Road. Just before reaching the start we stopped off at Tower Hill Reserve, 15km west of Warrnambool. This area is a vast crater formed in a volcanic eruption 30,000 years ago. There are quite a few easy walks around the place, a good chance to stretch your legs, as well as a peak walk with nice views. There’s a lot of vegetation restoration going on which is great to see but by far the best thing about the area was the wild emus, which hung out in the picnic area scrounging for food, but don’t give in!

But finally, what we’d been waiting for, the main reason for the trip! The Great Ocean Road, Australia’s most famous road, snakes and winds its way 250km from Torquay to Warrnambool. This historical road takes you along stretches of beautiful coastland, through seaside towns, past surf beaches, and inland through dense rainforests.

I don’t know why it is, but all the road trips I’ve done over the past couple of years, I’ve done them back to front. This isn’t a problem, it just means when you’re reading through your guidebook you have to read backwards, a bit of an annoyance really. So sticking to tradition I started the Great Ocean Road at Warrnambool.

This is the sort of road you could happily take your time pottering along, pulling over at every brown sign directing you towards a ‘point of interest’. Unfortunately we were on a bit of a time scale. The Australian Tennis Open was on in Melbourne and Chris really wanted to make it to the last general admission day. So we didn’t do too much research and reading and just picked out ‘points of interest’ at random.

London Bridge- There used to be another arch platform linking the bridge to the land. However, in 1990 one of the arches collapsed, severing the link and leaving 2 tourists stranded on the bridge. They had to be rescued by helicopter. 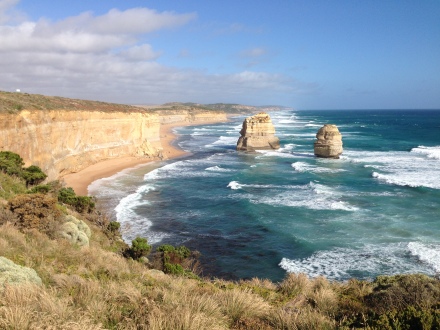 The 12 Apostles- These are the best-known rock formations in Victoria. Over the years the weather and sea has slowly eroded these apostles down to just 6. 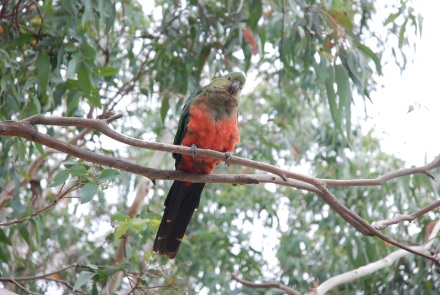 From here we began to leave the coast and drive inland as we entered the Great Otway National Park. As we drove along winding roads through dense forest it gave a nice contrast to the road. You could spend days exploring this national park. There’s walks, waterfalls, wild koalas, parrots, and if you can time it right, glow worms that appear along one of the forest walks at night. We only had time to spend one night here where we stayed at a free campsite on the rugged coastline, before moving on.

We left the dense forest and came out once again to drive along the coast. As far as Chris was concerned from this point on there was only one more place that we must see, and that was Split Point Lighthouse, the lighthouse used during the filming of the children’s TV show ‘Round the Twist’. Seeing the lighthouse in the flesh brought it all back, only problem is now I can’t get the bloody song out of my head!